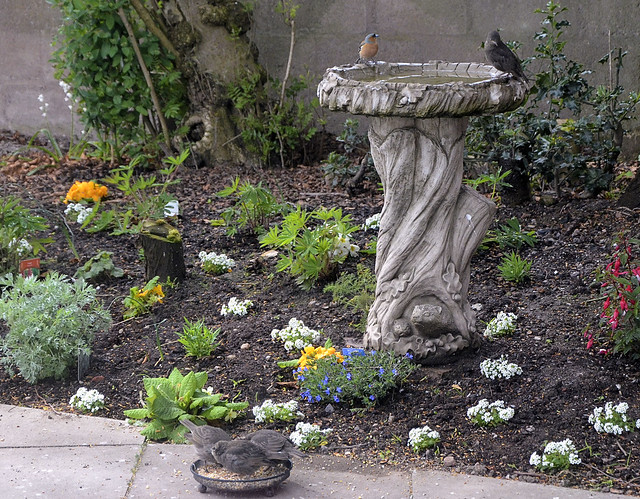 “Dude, you have no idea. It’s impossible to get any peace. It’s all ME ME ME ME ME ME ME ME ME. I can’t even have a bath without one of the others wanting to get in too. Just five minutes, you know? That’s all. That’s all I want. Just five minutes. Or two. I’d settle for two. Or even one. Hell. Yeah. Let’s say one. One damn minute of peace. To chill, have a drink. Get some water up under the feathers. There’s no way I’ll ever be able to eat in peace, I’m not going to torture myself imagining being able. To eat. By myself. Without one of THEM trying to get in on the act. But a bath? You’d think I could manage one godsdamned freaking minute by myself to get the dust out. Just one. One. That’s all. Not twenty, not ten. Just one.” 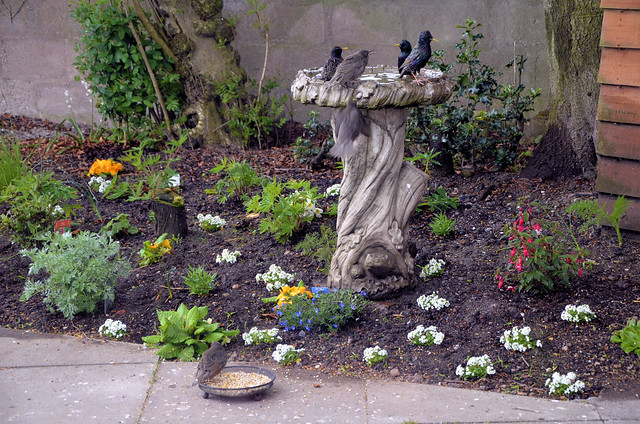 Spring means the return of communal bathing season. The birds didn’t do much bathing over winter, unsurprisingly. Now the sun forays forth occasionally and Floralia is upon us, they are back at it. It’s also baby-making time, so our garden is a flurry of frantic feathered fauna doing their best to put ALL THE FOOD into their beaky faces to take back to the nest.

While chatting with a colleague at work over a break, looking out the window at some seagulls, I voiced aloud my imaginings of what the birds might be thinking. She expressed surprise that anyone would do this — I have no idea whether this habit results from a childhood of indoctrination by Johnny Morris, or simply my constantly hyper-active imagination. I can only assume there’s something instinctive about it, though; since being exposed to the concept, my colleague tells me the habit has caught on.

At the meeting of Lemon Tree Writers a fortnight ago, we received an interesting workshop from the writer Sophie Cooke. A workshop presenter rarely covers short fiction, long fiction and poetry all in the space of one workshop, and this one was very well received by our eclectic mix of Scottish writers. While largely pitched for novice writers, I enjoy any prompt to produce some potentially useful word chunks, and found this no exception. Despite poetry requiring much more effort from me than prose, I managed to throw something together that didn’t sound terrible when I read it out, reminding me again of that well-known quote from cyclist Greg Lemond:

If it had been suggested to me even five years ago I could produce an eighteen line poem in the space of ten minutes, which — critically — I would not be too embarrassed to read out to a dozen people I barely knew, I would have found it hard to believe. Exercises like this are good reminders of why all the writing and reading is important. Even writing one has no intention of ever seeing the light of day presents an opportunity to embed a reluctance for copulas, a mental red flag for flabby words such as “that” and “very”, and the habit of specificity.

I think, these days, even my imaginary conversations between starlings need less copy-editing than they used to.

“So, um, Mad Max, what did you think?”
“Mumble-mmmf?”
“Mad Max. The new one. Tom Hardy and Charlize Theron.”
“Mmmm mmmf mmmf mumble mmf.”
“Yeah, I know you went to see it last Thursday. That’s why I was asking.”
“Mmmf gnnnngh mmhgnn mmf.”
“It’s just, you know. I didn’t like it.”
“Mmble?”
“Everyone says it’s fantastic, euphoric, the best thing ever, and Furiosa might as well have been driving around a War Rig loaded with salty man tears, but it was stupid.”
“Mmmf mmmble gnngh mmfngle!”
“Really! They only take the thin, pretty girls, no water or food, only, you know, mother’s milk — and all that milk came from the large ladies they left behind, who were good enough to provide milk, which means good enough to provide babies, but not come with or something — drive hundreds of miles into the desert and then turn round and drive back again. Then Max disappears into the desert. Seeing as how Joe’s army made it through the collapsed arch in about twenty minutes the first time, it’s going to be about a day at most before the War Boys come to retake the Citadel, and they’ve got all the weapons and the fighting experience. All Furiosa has now are the children and the starving rabble. Even the Vuvalini all bought it on the return trip, and they were the ones most likely to put up a reasonable defence. They needed some of Thrush’s lasers or something.”
“Mmmfle mumble bumble mmmf.”
“Why can’t women have decent storylines too? Are we supposed to be happy just because we get to drive a lorry for a change?”
“Mmmble mumf.”
“I knew you were going to say that. I never should have brought it up. It’s pointless trying to have a conversation with you.”

“Do you think Hannibal uses TP or a bidet?”
“Excuse me?”
“He’s a serial killer, I know, ‘Don’t eat the rude’ and all that. But he’s, what, an aesthete, right?”
“I really don’t know what you’re talking about.”
“Hannibal Lecter. I just can’t imagine Hannibal Lecter using toilet paper. I mean, what brand would he buy? I don’t think he’d be won over by puppies. Does Claire Fontaine make toilet paper?”
“Is this—”
“Seriously. What’s the most expensive toilet paper you can buy? Also, do you think eating people makes a difference to the consistency of your poop? I can always tell when I’ve been at the suet. It’s just greasier. Don’t you get that?”
“I don’t think—”
“I bet he can tell. I bet he can smell it. I bet if you went to dinner with him and he fed you one of the rude he’d get a sense of satisfaction from smelling it in your farts.”
“THIS IS NOT AN APPROPRIATE TOPIC OF CONVERSATION FOR OUR CHILD’S BATHTIME.”